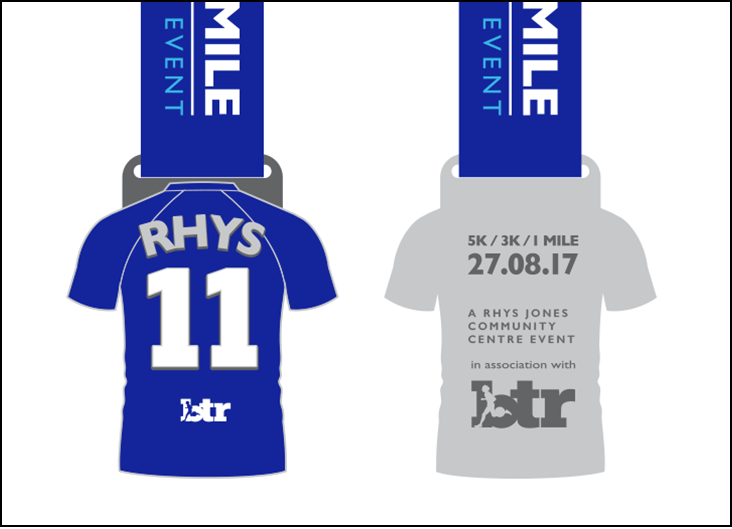 With BTR Liverpool running their first ever honorary Run For Rhys event on August 27th, Bespoke Medals are delighted to have produced the finisher’s medals.

The event pays tribute to young Rhys Jones who tragically passed away 10 years ago.

Established by BTR Liverpool in tandem with the Rhys Jones Community Centre Management Board and Directors, the run takes place in Croxteth Park.

The beauty of Run For Rhys is that there is no age restriction with everybody being able to take part.

The main race is a 5k taking in a single loop of Croxteth Park but there are also two shorter running routes too.

Competitors can also choose to take part in a 3k or one-mile route based on their preference.

Not only that but for those unable to attend Croxteth Park on August 27th, Run For Rhys is also accepting virtual entry so people can also complete their run on holiday.

For everybody that takes part, both in Liverpool or elsewhere, they will each receive one of our stunning Bespoke Medals.

The first ever Run For Rhys event staged, the run is characterised by a football shirt-shaped medal in our Enamelled style.

Most importantly, the shirt is blue to represent Rhys Jones’ beloved Everton Football Club while the ‘11’ marks the age he was tragically taken away from us.

Get Your Own Bespoke Medal

If you like what you see and want to get your hands on your own Bespoke Medal, take a look at our Medal Styles and Popular Event Medals and then request your own quote.

What Are the Benefits of Designing Your Own Medal?

We design bespoke medals, which are ideal for any event you may have planned! Find the benefits of designing your own medal here. Contact our team today!