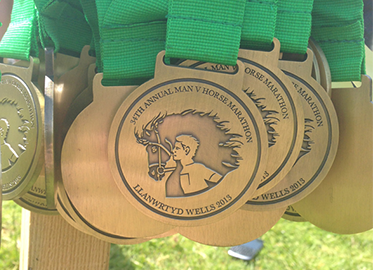 The 34th Man Versus Horse event took place on Saturday 8th June on a lovely day in Llanwrtyd Wells in Wales.

The event is a gruelling 24-mile route of hills, forests and open countryside.

Legend has it that the event started due to the landlord of the local pub overhearing an argument between two drinkers.

The argument surrounded whether a man or a horse would be the fastest at getting over the mountain range behind the town.

The landlord wanted to settle this dispute, and so an opportunity arose to bring tourists to the town by organising the first Man Versus Horse race in 1976.

There has only ever been 2 human winners of the event, and this year didn’t see the tally added to as Beti Gordon rode her horse ‘Next In Line Grangeway’ to victory in 2 hours 18 minutes.

The first man to cross the finish line was Hugh Aggleton, 28 minutes later than the winning horse!

Running Imp were proud to sponsor the event with the Bespoke Medals given to the event free of charge.

Running Imp staff members Rachel and Jemma were both present and were privileged to be chosen to start the event while also presenting the trophies to the winners.

Fancy creating your own one-of-a-kind race? Head to Bespoke Medals for your medals, and Running Imp for everything else!