May Medal of the Month – Lincoln 10k 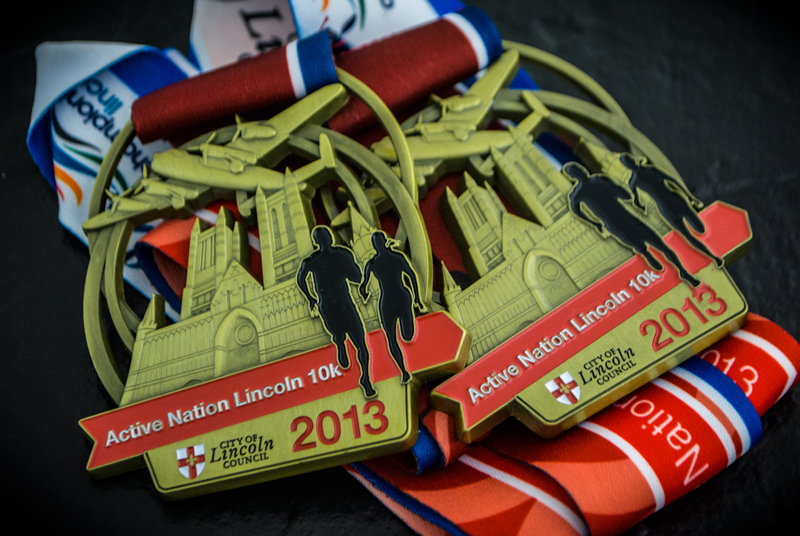 Made for the Lincoln 10k, our May Medal of the Month features the city’s iconic cathedral.

The medal also includes a flyover from a famous Lancaster Bomber plane, a tribute to the region’s proud RAF past.

The turnout was fantastic with 5,500 runners taking to the streets to raise money for charities.

The winner of this year’s event was Ben Livesey, a 34-year-old runner from RAF Waddington. He completed the course in a great time of 30 minutes and 15 seconds.

Liz Cocks was the winner of the women’s race in a time of 35:19. She was using the event as a training race for the Manchester Marathon in a few weeks.

There were several fundraising stories too, including Iain Maynard who ran with a fridge strapped to his back raising money for the Cystic Fibrosis Trust.

Mr Maynard survived a bullet shot to the head whilst on duty in Afghanistan back in 2009, with his helmet fortunately shielding the impact.

Twenty-three-year-old Sammy Harrison lead a 33-strong female team to run in memory of her mum, Alison, who suddenly collapsed and died in 2009.

The group included one of Running Imp’s purchasing administrators Sophie Reynolds too.

Over the 4 years that the group have ran the race, they are hoping to have passed the £5,000 mark for the Lincolnshire and Nottinghamshire Air Ambulance.

For more photographs and stories from the event, please visit www.thisislincolnshire.co.uk.

What Are the Benefits of Designing Your Own Medal?

We design bespoke medals, which are ideal for any event you may have planned! Find the benefits of designing your own medal here. Contact our team today!